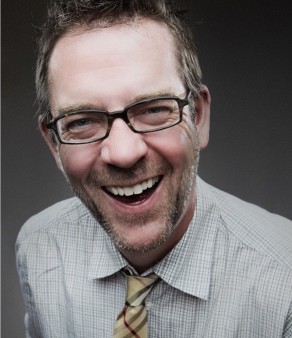 Dine out and fight AIDS on Thursday, April 26, when most cities partake in the restaurant-based fundraiser.

Prepare to loosen your belts on April 26. That’s the main date for Dining Out For Life, the annual fundraiser for HIV/AIDS services. The concept is ingeniously simple: On that day, participating eateries donate flat fees or portions of their proceeds to their local HIV/AIDS organizations. More than 3,000 restaurants will participate in over 60 cities across the country.

The event, sponsored by Subaru, raises about $4 million each year, with a total of about $38 million to date. This year promises to sweeten the pot, though, because New York City is (finally) participating. Some cities host the event on different days, such as Nashville on April 17 and Philadelphia on April 19, and yet others wait until summer, fall or even December 1, World AIDS Day. For details, visit the Dining Out For Life Facebook page for a handy schedule, or visit its website here or follow it on social media.

“(Dining Out For Life) is a way to make a really meaningful contribution to the fight against AIDS.” @thetedallen on how April 27 will be the most satisfying (and tastiest) day of your year. #StepUpToThePlate #DiningOutForLife

POZ spoke with event spokesperson Ted Allen, whom you all know as the host of the Food Network’s Chopped as well as one of the original guys on the groundbreaking Queer Eye for the Straight Guy. Allen gushed about the seismic shift he’s witnessed in America’s culinary habits and dished about Antoni Porowski, the hotly contested—and smokin’ hot!—foodie on the Queer Eye reboot who, as of last week, just happens to also be a delectable underwear model (much more about that below). But before we get into that…

In doing research for this interview, I was surprised to learn you have a background in journalism, not the culinary arts.

I even wrote for POZ before. I’m so glad you guys are still fighting the good fight.

What? You had a byline in POZ? I had no idea.

Back in my Chicago days, I was working as a reporter and did a few things for [POZ founder] Sean Strub. Mostly now what I do is food. My career has been a strange career but one I’m quite happy about. I tell young people all the time that you have to keep your eyes open for strange opportunities. I was writing for Esquire when I heard about the chance to audition for Queer Eye for the Straight Guy. I had never been on TV or in a school play and had no reason to expect to get that gig—and I got it. And it changed everything for me. And the timing [the show debuted in 2003] couldn’t have been better because it was right when the magazine industry was starting to get lousy. 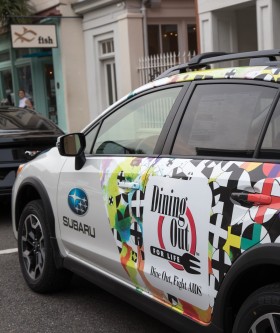 You must be super excited about this year’s Dining Out For Life for the same reason I am: It’s finally in our hometown, New York City.

That’s a real achievement for obvious reasons and should make 2018 a really good year for Dining Out For Life. For me, the whole point of Dining Out For Life is that it gives everybody the opportunity to make a meaningful contribution to the fight against HIV/AIDS just by doing something you would do anyway. Maybe you feel a little less guilty about ordering dessert or a second bottle of champagne because you know you’re contributing to something important. And what I like to say, especially when talking to someone in the trenches, like POZ, is that not everybody can do that. Most people are teachers, police officers, plumbers, raising families and children and they’re really busy. So this very ingenious fundraiser makes it possible for anybody to make a meaningful contribution. And all the money raised in your community goes to your community. So you’re helping your very own friends and neighbors.

Tell us about your background and how you got involved in the fight against AIDS.

I came out [as gay] a little late in life, and sometimes I wonder if that’s just providence, because had I come out when I was 18, I would have been at ground zero for the epidemic. Had I been [sexually] active younger, I would have been in a lot of danger.

Younger people weren’t there to see the horror. I was in Chicago, where things were certainly bad. I was a working journalist. So there were limits to what was appropriate for me to do, but certain things [were taking place]. For example, my partner, who was my very brand-new boyfriend back at the time, marched with the Pink Angels, which was this very gay [anti-crime] operation in the Halsted/Boystown neighborhood of Chicago. They wore berets. I don’t know if they’re still around. They patrolled in groups around the places where the gay boys and girls hung out.

Is this the same partner you’re with today?

You got married, right?

The perverse thing is that marriage equality wouldn’t have happened the way it did if not for the devastation of AIDS. It led to an openness and a reconnecting with the rest of the country. It just accelerated things so dramatically in a horrifying way, but in a way that, oddly enough, had some social justice impact.

This is your 11th year as spokesperson for Dining Out For Life. What’s the draw for you?

I have to say, it’s an honor to be asked, but it’s also the least I could do, and it’s the Venn diagram that crosses over the things that are the most important to me in the world: food, civil rights, progress. It raises a ton of money to fight HIV and AIDS; it gets the word out to a generation that didn’t see the original plague; and also, as you know, the demographics of infection have changed over the years, and now we have other populations to worry about, like women of color. The white gay community got the memo, but there are lots of other communities that aren’t in that channel.

Whenever I happen to pose contrapposto, I partner w @Hanes and wear my Comfort Flex Fit Boxer Briefs - they keep everything where it should be, comfortably. #Vouchforthepouch w me thru link in bio ✌????. ????@jkrietemeyer

Now we have to switch gears and talk about the new Queer Eye. How are you liking it?

Oh, I really like it. I haven’t watched all of them. As you may know, my former assistant [Antoni Porowski] is the food and wine guy.

Can you clarify something for me? Porowski is quite the controversial figure in social media. I come across all these conspiracy theories about how he’s a phony because, for example, he suggested putting Greek yogurt in guacamole, which is apparently a horrible offense. And then I read that you recommended him for the show, and I’m thinking, Well, geez, I trust Ted Allen’s opinion. The thing is, I rarely cook, so I don’t know when a criticism is valid or whom to believe.

Believe me because I’ve eaten his food and known him for years. All I can tell you is that Antoni is a profoundly decent, smart, caring, empathetic, sensitive guy, and I’ve witnessed his passion. He came to one of my book signings with the express purpose of trying to get a job with me. And before long, he got one.

He lives across the street from me. Which is really just a coincidence. I hope [Laughs.] He has done tons and tons of cooking for Barry [Rice, my husband] and me. He is an incredibly passionate person about food. What particularly shines through in the show, aside from him being dazzlingly handsome, is that he’s real. And you can sense his passion and excitement about food. You want to quibble about the way he makes guacamole? Whatever. I suggest that you toss the New Yorker column aside [the one titled “The Exquisite Blankness (and Highly Questionable Guacamole) of Antoni Porowksi From ‘Queer Eye’”] and look at the New York Times article that came out a few days later [titled “Antoni Porowski Can Cook”] where the reporter went to Antoni’s home and watched as he made homemade spaghetti and meatballs from his own modification of the Marcella Hazan recipe. And they took pictures of him doing it, and she ate it, and it was great.

Here’s something you’ve got to understand. When you’re the food guy on Queer Eye, you’re working on men who don’t even know how to use a corkscrew. When you’re doing a makeover show for guys who don’t know anything about food, what do you expect him to do, teach them how to slaughter a pig? I mean, baby steps.

Another criticism is that Porowski doesn’t have proper training. But as you mentioned earlier, you don’t either.

No, I don’t have a degree in culinary, and I think that’s a positive thing. On Chopped, I see myself as a mediator between expert chefs and all our judges—people with decades of experience at multiple restaurants—and I see myself as a mediator between them and a broadcast audience. Whenever one of our judges says, “Oh, look, he’s making a gastrique,” it’s my job to jump in and say, “You mean a sweet and sour sauce.” I’m also very into food and reading about it and cooking, all they way back to Emeril [Lagasse] and Martha Stewart, whom I watched for years. I probably have 500 cookbooks.

Finally, how would you assess the food and restaurant scene in the United States today? How has it changed in your lifetime?

We’ve got all sorts of bad news in the culture right now, but cooking in America is undeniably great news. Thriving, booming artisanal restaurants happening in cities of every size. I don’t even want to call it a trend because it’s not ephemeral. It’s a systemic shift in American values.

In the ’70s, if you went to a grocery store, they likely didn’t even sell olive oil, and if they did, they might have one kind, maybe two. Today, you go to a Central Market in Dallas, and they stock at least 75 styles of olive oil. There are amazing restaurants in Portland, Oregon, and Portland, Maine, has the highest number of restaurants per capita of any city in the country. You can get great food in Indianapolis, Albany, Seattle. And in Nashville, my friend Maneet Chauhan is killing it with three restaurants. It used to be just New York, New Orleans and the Bay area. That’s not at all true anymore. We even finally have good tacos in New York City!