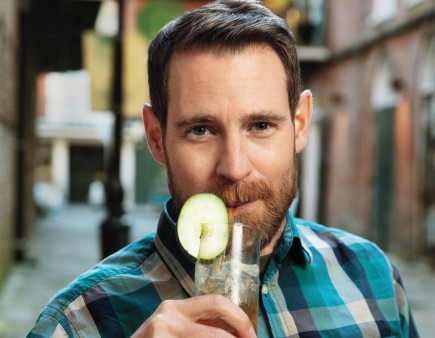 “It feels like a huge missed opportunity,” says reality TV star Danny Roberts, who has been living with HIV for 11 years.

The final credits have rolled on the reality TV series The Real World Homecoming: New Orleans—a reunion of the cast from MTV’s 2000 The Real World: New Orleans—and an entire HIV storyline remains on the proverbial cutting room floor. The Paramount+ series left out the fact that Danny Roberts, now 44, has been living with HIV for 11 years, even though he has been very public about this status.

“I just kept waiting: ‘Are they going to shoehorn this into the end?’ And then I realized, ‘Wow, that’s the end of it.’ And they absolutely cut it,” Roberts, who is gay, told the Los Angeles Times. “It feels like a huge missed opportunity.”

In the 2000 series, the newly out heartthrob dated an Army captain whose identity couldn’t be revealed because of the military’s “Don’t Ask, Don’t Tell” policy. The situation drew national attention to LGBTQ discrimination. 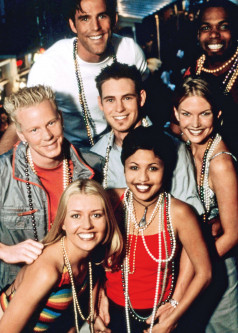 The 2000 cast of MTV’s “The Real World: New Orleans”Courtesy of MTV

Roberts had hoped that the reunion series would offer him a chance to bring attention to a new set of issues. “So much of what I went to New Orleans to talk about was the nightmare of our health care system, the nightmare of not having access, the nightmare of the cost,” he told the newspaper, “and the amazing flip side of the power of these medications [that can prevent and treat HIV]. There was so much to unpack.”

This past spring, as Homecoming was about to air, Roberts told the LGBTQ advocacy group GLAAD that he hoped to tackle HIV stigma in the new series. “It was really challenging to realize how much of the world, including gay men, still have enormous amounts of negative bias towards anyone who is positive,” said Roberts, who has been living in Manhattan and Vermont, working as a tech recruiter and helping raise his 6-year-old daughter with his ex-husband.

“It still comes loaded with all sorts of judgment and preconceived notions,” Roberts continued. “And I just thought ‘Well, here’s the next chapter of my life where the universe has presented a challenge to me that I want to own and be vocal about so that hopefully other people live in a little less pain.’” (To read the full POZ article and watch the interview, click “HIV in ‘The Real World’: How Danny Roberts’s Visibility Signals the Fight Against HIV Stigma.”

Roberts told the Los Angeles Times that producers told him that the HIV storyline had been omitted because of possible legal issues involving implications of his former partner, a charge he deemed “silly.”

Instead, the show focused on his mental health issues—and on the more typical drama involving the other housemates, such as drunkenness and accusations of assault.

It’s especially shocking to find HIV deleted from a series when one considers that arguably the most famous storyline of the entire franchise involved HIV-positive cast member Pedro Zamora, who died in 1994 at age 22—one day after MTV aired the final episode of The Real World: San Francisco. 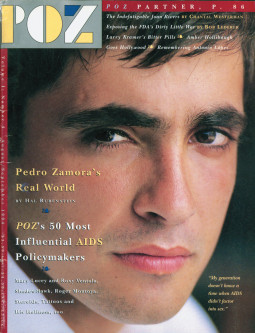 Pedro Zamora on the cover of POZ, September/August 1994

For more on Zamora’s legacy, read “25 Years Without Pedro Zamora,” a POZ blog post by Shawn Decker from the January 2020 issue of POZ. A companion piece,  titled “Remembering Sean Sasser,” about Zamora’s partner reflects on Sasser’s legacy. The latter article was written by Marvell L. Terry II of AIDS United and Charles Stephens of the Counter Narrative Project.

Sasser, a gay Black man, and Zamora held a same-sex commitment ceremony on an episode of The Real World, in what is noted as the first such ceremony in television history. Same-sex marriage didn’t become legal nationally until 21 years later, in 2015. Sasser was also HIV positive; he died in 2013 of a rare lung cancer. 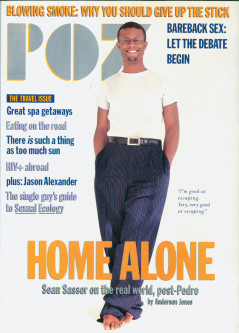 Zamora graced the August/September 1994 cover of POZ, the magazine’s third issue, pictured above. See “Pedro Leaves Us Breathless” to read the story. Sasser also appeared on the cover of POZ, in June 1997. To read that article, click “Nowhere Else to Go.”