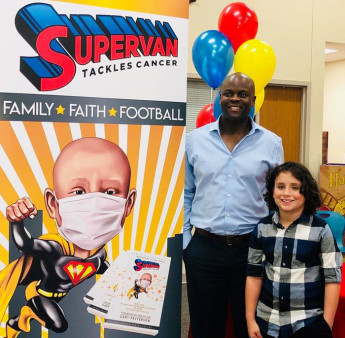 The former Indianapolis Colts player founded Tackles4Cancer after his own diagnosis.

In 2014, days before his 39th birthday, William Dominic “Billy” Austin was diagnosed with Stage III non–Hodgkin lymphoma. Not long after that the former Indianapolis Colts player started an organization to help people with cancer who lack the transportation necessary to get to their appointments, Essence reports.

Tackles4Cancer was born out of Austin’s own transportation troubles during the early stages of his cancer treatment.

“My treatment was scheduled to start and I had a pre-appointment, and it took about 30 minutes,” he recalled. “And I was parked illegally. However, I did have a number of parking tickets that had accrued just from living in [Los Angeles].”

When Austin finally left his doctor’s office, his car was gone. His concern became not only how his body would respond to chemotherapy but also how he was going to get to his treatment appointments.

He decided to walk 2 ½ miles from his home to the hospital, where he ended up in a space with 25 strangers who were all “receiving a cocktail to kill us and bring us back to life.”

Some people were accompanied by loved ones, while others, such as Austin, were alone. There was also a young lady who didn’t know how she was going to get home after her treatment.

Austin especially wanted to help folks who delayed their treatment because of a lack of transportation, which led to the idea for Tackles4Cancer.

Early in the process, Austin reached out to fellow Houston native Beyoncé for support, and the artist complied. She and several other celebrities continue to help the organization reach the community and do its work.

“We want to be that vehicle to help them make it to remission road,” he said. “We’re just in our fourth year, and things are going to continue to grow and impact the lives of even more patients.”