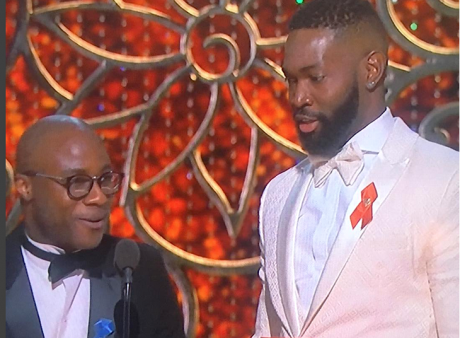 Guess which iconic actress used to own this particular ribbon—plus the one worn by Casey Affleck!

Now that we’ve calmed down after what must be the biggest surprise ending ever of the Academy Awards—La La Land was incorrectly announced as Best Picture, when in fact Moonlight won the honor—let’s look at another unexpected Oscar moment: the return of red ribbons at the podium.

The red ribbon has been a symbol for AIDS awareness since the early 1990s. Back then, before the advent of lifesaving HIV meds in 1996, the ribbon was prominent at the Oscars, but it has largely been missing from the ceremony for at least the past decade. That is, until last night.

When Casey Affleck picked up a statue for Best Actor, a red ribbon pin adorned his lapel. It turns out that the pin has its own star-studded backstory: It came from Elizabeth Taylor’s personal collection. The Elizabeth Taylor AIDS Foundation (ETAF) confirmed via Instagram that the iconic activist wore it when she accepted the Jean Hersholt Humanitarian Award at the 65th Academy Awards.

Another red ribbon made an appearance when Moonlight scribes Tarell Alvin McCraney and Barry Jenkins (who also directed the film) won the Academy Award for Best Adapted Screenplay. McCraney wore a red AIDS ribbon, while Jenkins wore a blue one that shows support for the legal group the American Civil Liberties Union (ACLU).

McCraney’s ribbon was also one of Elizabeth Taylor’s personal red ribbons. And People magazine notes that it was 25 years ago—in 1992—that she first wore a red ribbon to the Oscars, bringing the world’s attention to the now-iconic AIDS symbol. (The red ribbon was created in 1991 by the Visual AIDS Caucus and it was first launched publicly when it was worn by Jeremy Irons at the 45th annual Tony Awards.)

Congrats to #Moonlight for winning best adapted screenplay, and for their moving acceptance speeches. #redribbon back at the Oscars. #aclu #blueribbon

Moonlight tells the story of a young Black man growing up in a crack-infested Miami neighborhood while coming to terms with being gay. Unlike Oscar-winning movies such as Philadelphia, Precious and Dallas Buyers Club, HIV is not explicitly addressed in Moonlight, but in real life, both McCraney and Jenkins were born to mothers who became addicted to crack and contracted HIV. What’s more, both men grew up in Liberty City, the same impoverished neighborhood depicted in the film, although they didn’t know each other until they were adults working on Moonlight. (For more, read “Men Behind Moonlight Share Their HIV Connection.”)

During his Oscar acceptance speech, McCraney dedicated the award “to all those black and brown boys and girls and non-gender-conforming who don’t see themselves” in film.

As the Los Angeles Times pointed out, Moonlight is the first LGBT film to take home the Academy’s top prize. “Film is our largest cultural export and must represent the full diversity of the people who make up this country,” tweeted Sarah Kate Ellis, the president of advocacy group GLAAD. “This sends a strong message to the film industry that it needs to embrace inclusive stories if it wants to remain competitive and relevant.”

McCraney has previously spoken about the importance of representing HIV in film and television. At a World AIDS Day roundtable last December, he noted that most HIV story lines have been about white people. Today, African Americans in the South, particularly Black men who have sex with men, are the hardest hit by the epidemic. “We’re not allowing people we want to reach to be at the center of the conversation,” McCraney said, adding, “Where’s the story about Alvin Ailey?” For more about the World AIDS Day event, read “Celebrities Discuss How Hollywood Can Fight AIDS [VIDEO].”

Coincidentally, today, February 27, would have marked Elizabeth Taylor’s 85th birthday. ETAF celebrates the occasion with a fabulous three-minute homage to her film and activist career. To watch it, check out the POZ Blog post “Ogle This Mesmerizing Liz Taylor Montage and Raise AIDS Funds [VIDEO].”