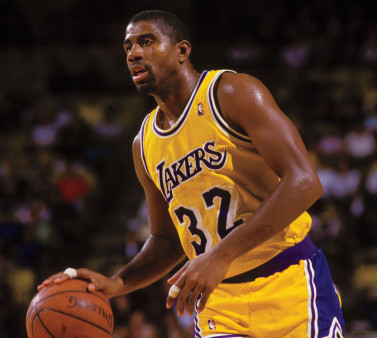 Magic Johnson originally retired in 1991 after announcing he had HIV. Dreamstime.com

“They let Magic Johnson play basketball with FULL-BLOWN HIV but won’t let Kyrie Irving play because he won’t get a COVID shot.” No. No. No.

You don’t need to be a COVID-19 expert or a hoops fan to cry foul at the following tweet from a sitting U.S. representative: “The fascist NBA won’t let Kyrie Irving play for refusing a vaccine. But they still let Magic Johnson play with HIV.” Indeed, the Twitterverse exploded with posts spelling out the copious errors in those two sentences conflating COVID-19 and HIV/AIDS.

The outrage-inducing tweet was posted Thursday, perhaps unsurprisingly, by Representative Marjorie Taylor Greene (R–Ga.), who has in the past been kicked off Twitter for sharing COVID-19 misinformation, but she is not alone in her views. Comparisons between Johnson’s and Irving’s situations have been circulating among various conservatives opposed to vaccine mandates.

They let Magic Johnson play basketball with FULL-BLOWN HIV but won’t let Kyrie Irving play because he won’t get a COVID shot.

Two days earlier, Lavern Spicer, an African-American Republican who is running for Congress in Florida, tweeted: “They let Magic Johnson play basketball with FULL BLOWN HIV but won’t let Kyrie Irving play because he won’t get a COVID shot.” It received over 27,000 likes and 10,000 retweets. In another post the same day, she added, “When I get to Congress I will work with my colleagues to END vax mandates IMMEDIATELY.”

What, exactly, is wrong with comparing basketball stars Johnson and Irving? Let us count the ways, with help from The Washington Post, which notes that the NBA is not the entity enforcing the COVID-19 vaccination requirement—it is New York City, home of Irving’s team, the Brooklyn Nets. If the Nets play away games in a city that doesn’t have a vaccination requirement for public indoor events, then Irving, who has refused to get vaccinated, will be allowed to play.

Beyond that, it might seem as if the comparison holds some truth. After all, Magic Johnson did shock the world when 30 years ago, on November 7, 1991, he announced he had been diagnosed with HIV and was retiring from basketball. This was five years before effective treatment became available; most people at the time considered HIV a death sentence. And yet, the NBA allowed Johnson to play in the 1992 All-Star Game; that same year, Johnson was also a member of the Olympic “Dream Team.”

But remember how HIV and COVID-19 are spread. As the POZ Basics on HIV Transmission explains, HIV is transmitted through body fluids, mostly through sex, needle sharing and from mother to child during pregnancy. It is not spread through sweat or spit or touch. Fellow basketball player Joe Kleine told the Post that most players in the early ’90s weren’t concerned about HIV when they played against Johnson because they understood the risk was extremely low. Kleine recalled his team doctor at the time telling him, “You’re more likely to get hit by a train than you are of getting HIV from Magic Johnson.”

Compare that with how SARS-CoV-2, the virus that causes COVID-19, is spread: “Through the air in respiratory droplets or aerosolized particles released when a person with the virus coughs, sneezes, sings, talks or breathes,” according to COVID-19 Health Basics, which adds that “people can transmit the virus even if they do not have symptoms. Some new SARS-CoV-2 variants spread more easily than the original strain.… SARS-CoV-2 transmission happens most often indoors.”

What a dumb ass. HIV is sexually transmitted not a respiratory virus not to mention HIV+ folks who take ART and are undetectable are untransmittable. #UequalsU https://t.co/dOhvqTuHrw

Queer Eye star Jonathan Van Ness, who is living with HIV, responded to Representative Green on Twitter. Like countless others, he used the situation as an opportunity to educate. “What a dumb ass,” he started, “HIV is sexually transmitted not a respiratory virus not to mention HIV+ folks who take ART [antiretroviral therapy] and are undetectable are untransmittable. #UequalsU.” “Learn about HIV yall,” he added in a different post, “Enough with this fear mongering.”

Jemele Hill, a sports journalist for The Atlantic, told the Post that folks comparing Johnson and Irving in this light were “either stupid or…purposefully, willfully and [dangerously] ignorant. There is nothing about what is happening right now that has anything to do with what Magic Johnson went through. These are not the same.”

As for Johnson, he returned to the Lakers for the season that started in ’95. Looking back, he has said that if he knew then what he knows now about HIV transmission risks, he would not have retired after his diagnosis.

In related news, Johnson participated in a CNN town hall about the coronavirus last April, as the pandemic was shutting down the nation. To watch the video and read more, see “Magic Johnson on the Parallels Between COVID-19 and HIV.”

For a collection of POZ articles on the basketball icon, click #Magic Johnson. You’ll find headlines such as “How Magic Johnson Told His Wife—and Ex-Lovers—He Had HIV” and “How Ex-NBA Commissioner David Stern Helped Educate the World About HIV.”