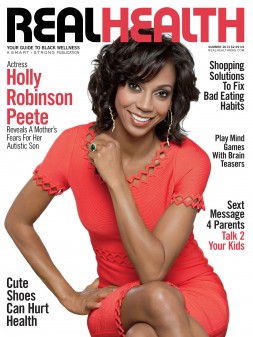 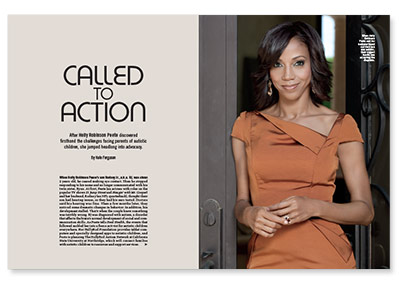 Click here to read a digital edition of this article.

When Holly Robinson Peete’s son Rodney Jr., a.k.a. RJ, was about 2 years old, he ceased making eye contact. Then he stopped responding to his name and no longer communicated with his twin sister, Ryan. At first, Peete (an actress with roles on the popular TV shows 21 Jump Street and Hangin’ with Mr. Cooper) and her husband, Rodney (an NFL quarterback), thought their son had hearing issues, so they had his ears tested. Doctors said his hearing was fine. Then a few months later, they noticed some dramatic changes in behavior. In addition, his development stalled. That’s when the couple knew something was terribly wrong. RJ was diagnosed with autism, a disorder that affects the brain’s normal development of social and communication skills. As Peete tells Real Health, the events that followed molded her into a fierce activist for autistic children everywhere. Her HollyRod Foundation provides tablet computers and specially designed apps to autistic children, and Peete is planning The HollyRod Autism Network at California State University at Northridge, which will connect families with autistic children to resources and support services.

When you got the diagnosis that your son had autism, how did you and your husband react?
We were devastated. We didn’t know how to handle it. This was almost 13 years ago. I know that doesn’t sound like a very long time, but there was no one out talking about autism. There were no spokespeople telling you it’s going to be OK. There weren’t a whole lot of resources, and it took a while for us to lift our heads after that one.

At that time, how much did you know about autism?
I knew nothing about autism except for what I’d seen in the media, which was basically Dustin Hoffman in a film [1988’s Rain Man]. And I had no friends, no people around me who I knew were affected. It just wasn’t on my radar. 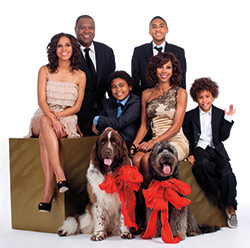 What were some of the biggest hurdles faced by you and other family members?
The biggest hurdle was for my husband and me to accept the diagnosis and figure out how to process it. There were so many questions: Where should we put him in school? What kind of therapy would he get? How do we deal with our daughter in this situation? There were a lot of things to consider, but schooling concerns were probably the second biggest hurdle. But for families facing an autism diagnosis, usually, the main issue is denial. You’re in such a state of shock that doctors have given you this diagnosis, and then you’re told many times—certainly in our case—that your child will never do so many things. Then you have to process all that and juxtapose what you hear against all the dreams that you have for your child. We had to line up this diagnosis with how we thought our son was going to be. This can be really difficult. But every parent is different; every parent has access to different resources.

How difficult was it for you and your husband to get the correct help for RJ?
Here’s the thing. We had resources. We could pretty much take him wherever we needed to, but we still saw hurdles and barriers and had to work through red tape and a lot of bureaucracy. We still got turned down by schools, so even though we had the resources and the wherewithal, we still faced plenty of issues. That was one of the reasons why, later on, we knew we had to speak out for other families. If you don’t have resources, there is so little that you can do, and that makes it so much more difficult. That’s when we knew we had to help other families navigate this journey.

What concerns do you have about the misconceptions or lack of understanding that people have about autism?
I have many concerns, and they’ve changed over the years from when my son was 3 and [we were dealing with] having friendships and the social stigma of being out. It has included people saying, “Can’t you control your child?” when your child is having sensory issues in public, in the supermarket, on the airplane—those incidents have been difficult. Now that he’s 14, probably my biggest issue is how is he going to function in society as a young African-American male. Is he going to be able to recognize certain signs if he gets stopped by a police officer? What he should do, what he shouldn’t do? He’s quirky. He doesn’t process things like most typical kids. That’s my latest fear as you can imagine, especially with incidents like what happened to Trayvon Martin [the black youth shot to death in Florida by a neighborhood safety officer]. I envision my son having just got finished walking to Coffee Bean—that’s his favorite thing to do in the neighborhood—and I panic when he goes. I don’t want to take away his independence, and I don’t want to drive the car alongside him. But I want him to be able to do the right thing in case he gets stopped by the cops, or if he finds himself in the wrong place at the wrong time, or they’re chasing someone who looks like him.

Last July, 50 Cent tweeted some disparaging words about autistic kids. What exactly went through your mind when you read it?
I’ve met 50 Cent before, and I know he’s brighter than that. I knew that this was an innocuous statement and that he wasn’t really trying to insult an entire community. But I don’t think he really realized that by cappin’ on somebody—“Fool, you look autistic”—that he realized what he was doing. Often, people in influential situations underestimate their impact. So all I wanted to do was A.) Have him take down the tweet, and B.) Really recognize that he had a teaching moment and the opportunity to help the country [understand this condition]. We’re not going to let “autistic” be the new “R” word—and we’re not going to brand that as being some kind of bust on somebody. That was my goal. I never asked for him to apologize. Other autism parents took the reins to ask him, “What do you mean, What does autism look like?” And that started a movement with hash tagging on Twitter. [Search the topic as #ThisIsWhatAutismLooksLike.] People were sending 50 Cent pictures of their kids, so he really got a good taste of the lobbying power of families with autistic kids. We’re very powerful and protective of our children.

We’re talking about 1 in 88 kids and 1 in 54 boys who have autism. I think it just gets overlooked sometimes, and talk about the misconceptions—there are so many children on the spectrum. And they’re not getting the funding, they’re not getting the attention, it’s disproportionate to the prevalence, so his remark did present a great opportunity to educate the public. I tried other routes to get to him, and when I wasn’t able to, it was an opportunity to publicly say, you know what, this was not OK. I thought he handled it well, and his apology was really lovely and very evolved, and I was happy about that. I’ll be honest, I was more upset about something that happened after that. Joe Scarborough [radio and TV host of the program Morning Joe and a former politician], who has not apologized, made an inference that the man who went on that murderous rampage in Colorado had autism. With no knowledge [of the shooter’s background] and as a journalist, he stood on this platform and [backed up his viewpoint by saying], “Well, I have a son with Asperger’s.” And that made it more of a crime for me—that he was a parent and would say that people with autism can act out in some crazy premeditated homicidal rage. That’s just not true. When I read about that, I said, “Oh my God, now we’ve got one more [stigmatizing myth to overcome]: that kids with autism grow up to be violent homicidal maniacs. Maybe 50 Cent isn’t as connected with autism in his world, but this is a man who has an autistic son.

Sounds like this really bothered you.
When it’s a parent who needs to be schooled, that is really tragic. To me, that means he’s just not thinking, and he still hasn’t really understood how his statement might put in people’s minds that children with autism could grow up—or young adults with autism who are lonely and socially disconnected—and this is something that they could do. There are so many other medical and mental disorders that could contribute to something like this, so this is not another stigma that we need to fight.