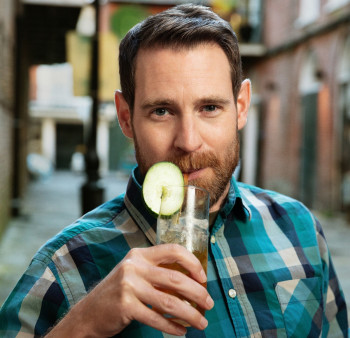 HIV in The Real World: How Danny Roberts Visibility Signals the Fight Against HIV Stigma

The Real World: New Orleans star sat down with GLAAD’s Anthony Allen Ramos to discuss his coming out about living with HIV.

Danny Roberts is living with HIV. He has been for 11 years. And he’s been doing so while starring in Paramount+’s The Real World Homecoming: New Orleans, a reunion special of his debut in The Real World: New Orleans (2000).

The 44-year-old actor and television personality recently sat down with GLAAD’s Anthony Ramos to discuss HIV stigma and the reason he decided to go public with his status for Entertainment Weekly in 2018.

“I could not believe, even though I went through my own journey to come to this understanding, but it was really challenging to realize how much of the world, including gay men, still have enormous amounts of negative bias towards anyone who is positive,” Roberts said.

“It still comes loaded with all sorts of judgment, and preconceived notions. And I just thought ‘well, here’s the next chapter of my life where the universe has presented a challenge to me that I want to own, and be vocal about so that hopefully other people live in a little less pain.’”

It has been over two decades since Roberts and the rest of the Real World cast came together again. Within that time, Roberts has become more stoic than he’s ever been.

“At this stage in [my] life it was probably the last thing on the radar expected to happen. I think for all of us it was a really special moment in time when it happened for us that we had all really tucked away,” Roberts said of his returning to The Real World.

The South is most affected by the HIV epidemic, accounting for 54% of all new HIV diagnoses in the United States.

According to the Centers for Disease Control and Prevention the impact of HIV in the South varies by race. Black Americans are severely affected by HIV in the South, accounting for 54 percent of new HIV diagnoses in 2014.

Black gay, bisexual, and other men who have sex with men accounted for 59 percent of all HIV diagnoses among Black Americans in the South.

Advocates are doing all they can to remind all Americans that HIV is a chronic health condition, not a death sentence. It can be prevented with one pill a day. It can be tested for and treated like any chronic disease such as diabetes. Effective treatment of HIV means the virus can be suppressed to the point of being undetectable and therefore, untransmittable, U=U. People living with HIV receiving treatment live long, healthy, full lives. In most cases, HIV treatment even means just taking one pill a day.

But fighting the spread of HIV will always be more than medicine. Sharing stories of those living with HIV, and sharing your own story as Danny Roberts is doing, is essential to ending the stigma that fuels new infections.

Penny DeNoble, co-executive director of Frontline Legal Services, a nonprofit corporation, founded in 2015, to provide legal and policy support for those on the frontline of America’s public health and human rights crises says that HIV advocacy “may seem scary and complicated” but getting involved can be “fun, easy, and rewarding.”

“The effort an advocate puts forth can benefit the communities they live in, serve, and are a part of what raises awareness, spotlights visibility, and helps stop the spread of HIV and prevents discrimination against people living with HIV,” she said.

“It is important for advocates (those living with HIV and those who are not) to educate and speak out on issues related to HIV and AIDS. It is especially important for people living with HIV to educate and inform through whatever forum or medium is available to them, to reduce the stigma and misinformation around HIV. That’s why the voice of Danny Roberts will be so important with carrying this message of visibility, advocacy and hope forward. Danny’s work is valued and this work is valuable!”

Other HIV Advocates, such as Jasmine Davis, a 44-year-old Black trans woman working with Crescent Care in Southeast Louisiana says that normalizing something that is stigmatizing and empowering others of the same experience is why HIV advocacy is vital. Crescent Care is a grantee of the Gilead COMPASS Initiative, which collaborates with grassroots nonprofits to to meet the needs of people living with and impacted by HIV.

“We must support people and communities who are not aware of the real time realities when it comes to HIV and the evaluation thereof,” Davis said. “Educating and empowering all communities encourages conversations so it becomes one of the normal day to day topics of life that everyone in some shape form or fashion has.HIV should be looked at the same way as any other virus or disease/illness.”

Davis says that highlighted the importance of U=U.

“Danny Roberts mentioned this and I think it’s really important when talking about HIV. Facts like U=U should be highlighted to bring awareness and educate people on the successes we have achieved while fighting the good fight.”

According to the United States Department of Health and Human Services, approximately 1.2 million people in the United States are living with HIV. About 13% of them don’t know it and need testing. HIV continues to disproportionately impact specific populations, particularly racial and ethnic minorities. In 2019, roughly 34,800 new HIV infections occurred in the U.S., new HIV infections declined by 8% from 37,800 in 2015 to 34,8000 in 2019, after a period of general stability.

Roberts says that revealing he is HIV positive felt like “a second coming out.”

“The same sort of guilt, shame, overcoming those biases. Unloading the baggage that you have carried in your own mind around the topic. The most difficult part of the journey was accepting the biases I held deep in my own psyche towards people who were HIV positive,” he told GLAAD.

“Having to confront that, and let that go. I think this is a lot of what anyone who finds out they’re positive goes through. There are those stages of strief. And then you come to the other end of that. You come to the end of a dark tunnel, and you find the strength to own it and be okay about it.”

Roberts went on to say that his main goal in returning to television was to “address the topic of spiritual and religious beliefs in our lives”... and how it makes a “negative impact on a lot of people in this world.”

“It’s part of my own personal story, growing up in the deep South. A lot of people’s views haven’t changed whatsoever. I really wanted to come back and address that topic. Especially in the era we’re in right now, where we’re going in reverse in many ways.”

“We agree that addressing stigma within the religious community can create positive change,” she said.

“The Framework for Dialogue program brings together people living with HIV/AIDS, religious leaders, and others to create community-driven action plans on how to best tackle stigma in the faith-based communities in New Orleans. By partnering with the faith-based community and community-based organizations, we can continue to educate communities about HIV, reduce the stigma around HIV, and break down barriers that prevent people from receiving needed care.”

The Real World: Homecoming is streaming now on Paramount+.

Serena Sonoma is GLAAD’s communications coordinator and media lead for the U.S. South.